Click here to watch Daniel read from THE LIMITS OF PLEASURE.

THE LIMITS OF PLEASURE

Click here to purchase The Limits of Pleasure (3rd Edition) on Amazon.com 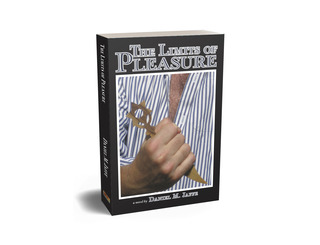 The Limits of Pleasure (3rd Edition)

“The Limits of Pleasure is a true page-turner, an invigorating exploration of the ways in which the past informs our present, and desire — both for the spirit and for the flesh—shapes our identity. Whether cruising for sex or communing with the spirits of his past, Jaffe’s hero reminds us that the sometimes perilous path to self-discovery is a journey we do not, and cannot, make alone. Tremendously wise, hilariously funny, and supremely sexy, Jaffe’s big-hearted novel affirms our faith in the power of the spirit, the glory of the flesh, to make us more fully human. A thoughtful, deeply satisfying novel.” Karl Woelz, co-editor, Men on Men 2000

"The Limits of Pleasure is a satisfying and thought-provoking read that will echo in your consciousness long after the surprisingly uplifting ending. Jaffe is a major talent, and Bear Bones Books is to be lauded for bringing this wonderful book back into print." Jerry Wheeler, Out in Print.

Yeled Tov (click here for details)
Daniel's newest novel follows a teenager's struggle to integrate his gay and Jewish identities. Can he be true to his desires while still being a good Jew?
The Genealogy of Understanding (click here for details)
In this novel-in-stories, the narrator explores different ways of adapting Jewish tradition to the modern world.
Jewish Gentle and Other Stories of Gay-Jewish Living (click here for details)
Daniel's short story collection examines many aspects of contemporary gay-Jewish life.
The Limits of Pleasure (click here for details)
A year after the death of his Holocaust-surviving grandmother, Dave Miller leaves Boston for Amsterdam, the home of Anne Frank, whom his Grandma revered. Dave, feeling undeserving to confront the suffering that Grandma endured, cannot bring himself to visit Anne Frank's house. Angry at himself and the world, Dave seeks out risky erotic trysts that mix sacred ritual with profane hedonism. Then he meets Alexander, a sexually reserved Dutchman of Indonesian heritage, who has identity conflicts of his own. The relationship shakes both men's lives to their core.