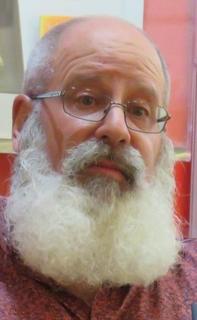 Daniel grew up and attended college in New Jersey, then moved to the Boston area for law school. He worked for several years as a corporate/securities attorney before throwing caution to the winds and pursuing a career in creative writing. After his partner (and future husband), Leo Cabranes-Grant, accepted a university teaching position in California, Daniel moved with him to Santa Barbara.

Several of Daniel's short stories have been nominated for a Pushcart Prize, and dozens of his stories, essays, and articles have appeared in anthologies, literary journals and newspapers in many countries and languages. His work has been taught in college and university courses. He holds degrees from Princeton University (A.B.), Harvard Law School (J.D.), and Vermont College (M.F.A.).

Yeled Tov (click here for details)
Daniel's newest novel follows a teenager's struggle to integrate his gay and Jewish identities. Can he be true to his desires while still being a good Jew?
The Genealogy of Understanding (click here for details)
In this novel-in-stories, the narrator explores different ways of adapting Jewish tradition to the modern world.
Jewish Gentle and Other Stories of Gay-Jewish Living (click here for details)
Daniel's short story collection examines many aspects of contemporary gay-Jewish life.
The Limits of Pleasure (click here for details)
A year after the death of his Holocaust-surviving grandmother, Dave Miller leaves Boston for Amsterdam, the home of Anne Frank, whom his Grandma revered. Dave, feeling undeserving to confront the suffering that Grandma endured, cannot bring himself to visit Anne Frank's house. Angry at himself and the world, Dave seeks out risky erotic trysts that mix sacred ritual with profane hedonism. Then he meets Alexander, a sexually reserved Dutchman of Indonesian heritage, who has identity conflicts of his own. The relationship shakes both men's lives to their core.